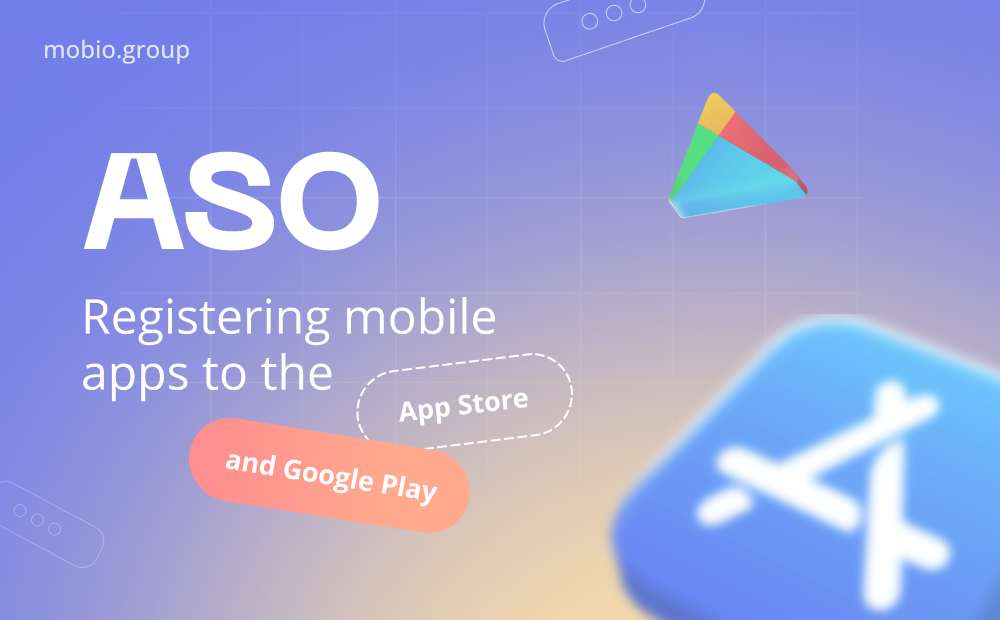 The promotion of mobile applications is one of the most current issues today. Many companies need to pay special attention to ASO, because it is the foundation of your startup promotion, the base without which it is impossible to make good advertising, the source, which provides a constant flow of pure organic traffic if set up correctly. It can also make an attractive profile for users who click on ads and get to know the product.

The main goal of ASO is to get the app to the top positions for relevant search queries and increase conversion to installation.

ASO (App Store Optimization) is a set of measures to optimize mobile application pages in AppStore and Google Play. The whole process of launching an application to international markets can be divided into two parts: technical and production.

Both platforms (AppStore and Google Play) have their own requirements for apps for promotion in new markets, and so does any participating individual country. Developers need to take these rules into account when uploading apps to the Stores.

If we talk about ASO, it also has its own peculiarities. Text blocks, screenshots are better to be localized (translated) into the language of the desired country, this parameter can affect the conversion rate — a basic parameter when working with ASO. Sometimes unintended seemingly opposite effects occur, for example, when the key queries to be used in ASO, have the best performance in English. We in Mobio Group were faced with such cases when we were working with games for Indian clients. In each case, it is necessary to analyze all the inputs and then to build ASO strategy based on the results.

When optimizing an app for different tables, it is important to consider all their differences. This is the only way to achieve your ASO goals. In this section, we'll analyze the differences between search results, metadata fields, and validation processes in the App Store and Google Play.

Filling metadata in the App Store and Google Play

Differences in the metadata change process: In Google Play, you don't have to make all the changes to the app's metadata. You can change the metadata fields in the Google Play Console. In the App Store, even if you want to change one word in the metadata, you need to download a new version of the app. This is why changing metadata in Google Play is faster than in the App Store. Different processes in app verification: In the App Store, your app is manually verified every time you submit a new version, whereas Google Play's app verification process is automatic. It usually takes moderators 10 minutes to check each app. It is impossible to check everything in 10 minutes, so sometimes moderators will approve an app even if it violates App Store rules in some way. But you can be sure that one day a moderator will notice that you broke the rules and will ask you to change your metadata. In such cases, you just need to fix those violations in your metadata and your app will be published. On Google Play, the verification process is much stricter. So under no circumstances should you violate them. Otherwise, sales of your app may be stopped or it will be removed from the stor. Google Play has no manual check, all applications are checked automatically, which often results in errors.

The main goal of ASO is to get the application to the top positions for relevant search queries and increase conversion to installation. To do this, the following are important:

In order for a user to see your app in the first place when entering a query of interest, you need to select the keys (word combinations and phrases that best describe your activity) and integrate them into the text metadata, which is indexed by the AppStore and Google Play search algorithm. Textual optimization not only affects the position in search results, but also has a significant impact on CPI. A well-crafted description that reveals the USP increases the number of downloads. To expand the semantic core it is suggested to use automatic cues from ASO services and app stores.

Mobio Group Tip: When working with the keys it is important to start from several parameters:

You need to look at the results. What applications are shown, so as not to promote a key that shows games, if you want, for example, a photo editor.

If it is AppStore, you should definitely compare it with ASA (Apple Search Ads) and index. Frequency is an internal parameter of the analytics service, but ASA and the index are official information from AppStore.

To start with the volumes available on the exchange.

Even with good text optimization, it is necessary to elaborate the visual component of the app to interest the user and motivate him to download the product. Visual elements with well-designed graphics show good conversion rates: the user easily identifies your app in a competitive environment, assimilating key information faster. The design of icons, screenshots, video clips, their quantity for publishing, and proper highlighting of UI elements of the application directly affects conversion rates. To find the design that will trigger the best response from users and minimize the risk of losing conversion it is important to test the graphical metadata.

Experimentation with different hypotheses makes it possible to understand what attracts users more and what they respond to better. You can test any elements: headline, description, images, button size, etc. Compare different combinations of creative sets, calls to action and audiences to find the most converting ones. Track user testing behavior, analyze patterns, and add popular content. Experimenting with app promotion/optimization never ends. Consumer tastes and preferences change. Come up with something new, test ideas with the tools available, and adapt to current user demands.

Users' opinion affects the position of the placement in search results and, consequently, the number of downloads. Rating, number of ratings, number of reviews, user sentiment — all have an impact on the page ranking of the application. Potential customers are guided by the ratings and reviews before deciding to install. Try to achieve a rating of at least 4*. Remind the user to rate or share their opinion in feedback, thank them for the positive feedback, respond to negative reactions. Listen to users' requests. Make periodic updates. Make sure the app works without crashes or bugs, loads without lags or freezes, and that navigation is smooth and clear.

In the next article we'll tell you how to promote mobile apps and games with ASO, sharing with you the basics, tips and our experience.

Contact us newbiz@mobiogroup.com and we'll help you with mobile app promotion with ASO. We guarantee your high ranking and customer retention.